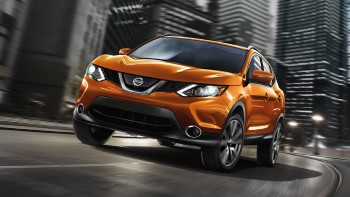 Nissan recently introduced the 2017 Nissan Rogue Sport at the North American International Auto Show in Detroit. This smaller, sportier incarnation of the popular Rogue SUV is set to join the Rogue lineup in spring 2017, aimed at expanding the Rogue’s consumer base and appealing to consumers who are looking for a smaller and sportier vehicle, such as single individuals, young couples, and empty nesters.

The Rogue Sport features up to 61.1 cubic feet of cargo room with the rear seats folded down and a Divide-N-Hide cargo system boosting conveniences in the cargo area. Cutting-edge features onboard the Rogue Sport will include an Around View Monitor with Moving Object Detection and available Nissan Intelligent Safety Shield technologies such as, Forward Emergency Braking with Pedestrian Detection, Rear Cross Traffic Alert, Forward Emergency Braking, and Intelligent Cruise Control.

Under the hood of the Rogue Sport is a 2.0L DOHC Inline 4-cylinder engine with Direct Injection Gasoline producing 141 hp. Plus the engine is paired with a Xtronic transmission.

S, SV, and SL trim levels are included in the Rogue Sport lineup.

In addition to the Nissan Rogue Sport, the very first Rogue Hybrid is also offered in 2017.

Redesigned for 2016, the Nissan Rogue broke the all-time Nissan U.S. sales record for the most units sold in a single month when it hit 40,477 models sold in December 2016.

For the 2016 calendar year in its totality, the Rogue even surpassed the Altima, Nissan’s long-running leader in sales, for the most units sold.

It is anticipated that these new members of the Rogue lineup will further boost sales for this popular SUV.

Get Ready for the Rogue Sport

Be among the first drivers in our area to try out the 2017 Nissan Rogue Sport when it hits dealerships by staying in touch with the team at Jeffrey Nissan. Stop in and see us or contact us today to get preordering information for the Rogue Sport and stay updated about its upcoming release.

In the meantime, we invite you to browse our current inventory of high-quality Nissan models and take your favorites on the road for a test drive!