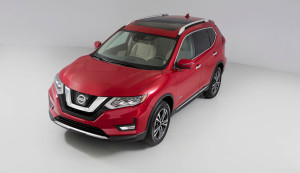 The first-ever Nissan Rogue Hybrid was recently announced as a finalist for the “2017 Green SUV of the Year” by Green Car Journal. The Green Car Awards are presented annually and are the pre-eminent honor for alternative-fuel SUV/crossover, connected, and premium vehicles. This year’s winners will be named at the Washington Auto Show on January 26, 2017 in Washington, D.C.

The Nissan Rogue already has a track record of success and sales growth. By expanding its model lineup to include a gasoline-electric hybrid powertrain, Nissan is proving that a green car doesn’t have to be a mini-sized sedan or hatch and that a regular-sized crossover SUV is a legitimate option.

Green Car Journal editor and publisher, Ron Cogan, notes that automobile manufacturers like Nissan are maximizing efforts to design and build efficient, environmentally-friendly vehicles in all shapes and sizes using hybrid, plug-in hybrid, battery electric, and other advanced technologies. This is a positive evolution for the industry and consumers because it means more options and greater opportunity for everyone.

The Rogue Hybrid represents an intriguing hybrid offering because it offers the same performance and space as a standard Rogue, while delivering a superior level of fuel efficiency. The new Rogue Hybrid’s EPA-estimated predicted fuel economy is 33 mpg in the city, 35 mpg on the highway, and 34 mpg combined for the Front-Wheel Drive version. All-Wheel Drive Rogue Hybrid models are projected to have an EPA-estimated fuel economy of 31 mpg city, 34 mpg highway, and 33 mpg combined.

The structure of the Rogue Hybrid’s system produces a strong, dynamic performance. It combines a 2.0L 16-valve DOHC aluminum-alloy inline 4-cylinder engine with a condensed-sized lithium-ion battery, plus the revolutionary Nissan Intelligent Dual Clutch Control system. The resulting horsepower from the gasoline engine is 141 hp and 144 lb-ft of torque, and 40 hp and 118 lb-ft of torque from the 30 kW electric motor. The total available power in the Rogue Hybrid is 176 hp. The system has a lithium-ion battery that can charge and discharge quickly, a clutch design offering smooth and precise shifting, and an advanced braking process that assists with battery charging.

Why We Love Technology